Wind, whales, boats on rough seas
and a giant octopus bring new life
to the old sea pole of Skerries in a
fabulous new work by Paul D’Arcy 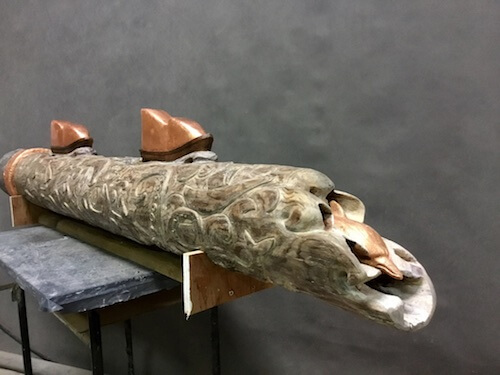 The conservation and preservation of the original Skerries sea pole is artist Paul D’Arcy’s latest sculptural artwork.
The old pole, once part of a life-saving breaches buoy apparatus on Red Island, was removed after many years after it was deemed unsafe.
It has been re-placed nearby by a pole designed from scratch by Shane Holland to be a memorial to those lost at sea.

“It was after a conversation with Ollie Grimes who mentioned he had the original sea pole, which had been rotting away until it was given to him by Eric Montgomery, who worked on restoring Skerries Mills, that I suggested it may be possible to conserve what was left of itand turn it into a piece of art,” explains Paul.

For the past couple of months, Paul has been working on a section of the top of the pole that stood beside the RNLI lifeboat house for many years and was part of so many nostalgic photographs of the past.

The six-foot section, including the top with its ‘lead cap’, forms part of the artwork.
Paul decided that it was worth trying to save the poll for future generations as it was such an important part of Skerries past.
“The pole was in a very bad state of repair and had missing timber, wood worm and dry rot and a large section of the center was just hollow. It was going to be a very considerable challenge to save it, never mind turn it into a sculpture,” says Paul.
“Before anything could be done, an enormous amount of work was needed to stabilize the timber and ensure it could last into the future.” This involved placing it in a bath of preservative for a month during the summer, after which it was taken outand dried slowly.
Only then could it be looked at in terms of turning it into a piece of artwork.
Initially, much of the time in creating the sculptural piece was spent working on a composition that would suit the pole shape.
This involved many drawings in addition to research on marine art. “Whatever I decided to do in terms of a composition,” says Paul, “it needed to flow 360 degrees around the girth of the pole and travel up and down the length of it.
“Unlike a picture, the pole only had one edge, which made composing far more difficult.” The idea was to reflect its connection with the sea and create a piece of artwork within the limitations of the damaged pole.

It was originally part of an elaborate apparatus used to help sailors in floundering ships.
When a vessel ran into trouble rescuers on the shore would climb to the top and, using a rocket, fire a rope to the stricken craft. The sailors would secure the rope after which a harness would be sent over to haul the men to shore.
Technological advances and increased resources saw the pole – essentially a 16ft tall telegraph pole with climbing rungs – fall out of use and into disrepair. It remained, however, a local landmark, featuring frequently in photographs from the area before the council eventually removed it a number of years ago. – DAN GRIFFIN
Paul did not want to introduce any new timber to the pole as it would take away from the authenticity of the piece and the artwork. He went as far as making his own ‘wood filler’ out of saw dust from the pole, so that all the timber in the pole is original. Paul kept the basic shape of
the pole with its two remaining steps as part of the design, with the concept of the sculpture,harking back to the day’s when seamen used to scrimmage onbone, “generally while at sea,” he explains, “when they had little else to do.” These works usually reflected sea creatures and ships
and Paul used this as the theme of his sculpture.
The design consists of howling wind, whales, boats on rough seas, a giant octopus which wraps around the pole, a jelly fish and a number of star fish; all flowing along the length of the pole. A dolphin also surfs from the waves at the end of the pole. All creating a very energetic picture of the sea and the creatures in and on it.
Consideration in the overall design has also been given to the ‘lead cap’ which covered and weather protected the top of the pole. It has been turned into a celestial map showing some of the Northern hemisphere constellations to reflect a time when
mariners used the stars to guide their ships.
“It is nearly finished,” says Paul, ”and I’m very pleased with the result and the fact that I was able to preserve the original sea pole, as it was such an important part of Skerries.

Any cookies that may not be particularly necessary for the website to function and is used specifically to collect user personal data via analytics, ads, other embedded contents are termed as non-necessary cookies. It is mandatory to procure user consent prior to running these cookies on your website.

SAVE & ACCEPT
Scroll to Top